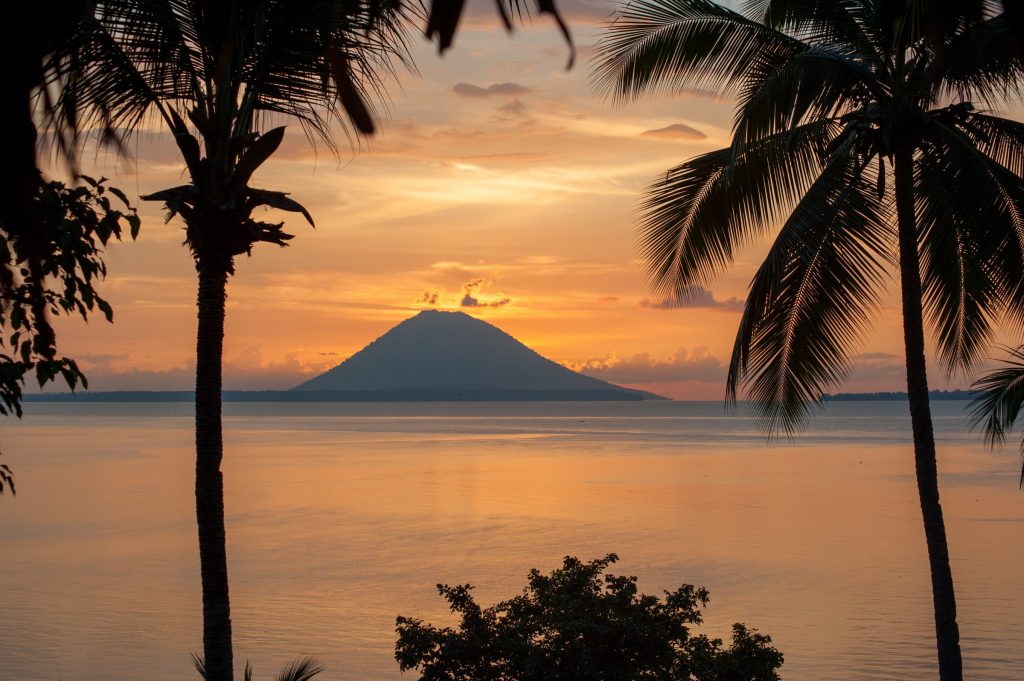 I settled upon this destination guide in a rather unusual manner. I zoomed in on southeast Asia, looking for places that were not so familiar to me. Sulawesi caught my eye, because I recognized the name but I knew very little about the actual place.

My geography knowledge is quite good, but that doesn’t mean there aren’t still a few places I have yet to discover! And hey, why not research a destination guide to also improve my own knowledge of the world? 😉

Despite my lack of familiarity, Sulawesi is anything but a hidden, isolated place. It’s the world’s 11th largest island and is home to almost 20 million people!

Given the island’s size, I decided to highlight just one of its six provinces. I chose North Sulawesi, at the tip of the northern Minahasa Peninsula. So, ready to learn about this beautiful and intriguing place with me? Let’s go!

North Sulawesi will appeal to:

North Sulawesi is at the northernmost tip of Sulawesi Island, in north central Indonesia. The province is rather small, only slightly larger than Montenegro. But don’t think for a second that means there isn’t much variety, because there most definitely is!

The provincial capital of Manado is a bustling waterfront city, with a metropolitan population of about 1.2 million. It serves as the main gateway to the region, and has an interesting mix of cultures including Chinese and Filipino influences. North Sulawesi is in fact one of the most heterogeneous provinces of Indonesia, and it is also one of only a few Christian majority provinces in the country.

While Manado itself offers few attractions, it is pleasant and safe, and spending a day or two taking in its cityscape and getting to know its unique local cuisine is definitely worthwhile.

Just a one-hour boat ride from Manado is the Bunaken National Marine Park. The park includes five islands but 97% of its area lies underwater, where a large portion of the marine habitat consists of coral reef. The park exists to protect a huge amount of biodiversity both above and below the surface. Bunaken Island in particular is famous for its world class diving and snorkeling, and is where the majority of park visitors stay. Tourism in the park is well-developed, with a large range of accommodation available, yet it is still far from being a mass tourism destination.

Northeast of Bunaken National Park is the Bangka archipelago, which is also known for both diving and fabulous beaches. Here tourism operates on an even smaller scale, ideal for underwater enthusiasts willing to go to a bit of effort to get to a little-visited marine paradise! And for still one more option, check out Lembeh Island to the east. It’s home to more spectacular diving…I know, so many choices, right?

But North Sulawesi has more than just idyllic beaches and coral reefs. Inland from the coast you’ll find incredible rainforest landscapes and mountains (many of which are active volcanoes) reaching nearly 2000 meters in elevation. There are also two large lakes, numerous rivers and some pretty cool wildlife (like tarsiers, at 10-14 cm tall the world’s smallest primate), not to mention gardens, temples, and clove and coconut plantations.

The inland areas also have a more intact traditional culture, and the north Sulawesi people are famous for their smiles, friendliness and hospitality. What’s not to like about that?

I don’t think I even need to say that the North Sulawesi ecosystem is an important one biodiversity preservation. The area is particularly vulnerable to both air and water pollution, and like pretty much everywhere else this has harmed the local environment.

Unsustainable fishing, and even worse the destructive practices of blast fishing and cyanide fishing (they are as bad as they sound!) are significant issues for the marine ecosystem, and numerous groups are working with the local population and authorities to stop these practices.

Gold mining in the province has also resulted in environmental damage and the exploitation of local workers, but in a huge victory for a coalition called the Bangka Conservation Fund, they secured an Indonesian Supreme Court ruling to stop the development of a gold mine operation on tiny and fragile Bangka Island. Land clearing had already damaged mangroves and offshore reefs, however, so efforts are still underway to secure funds to attempt to repair the damage.

But what should the average visitor look out for when planning a trip to the area? A good place to start is booking lodgings that put a high priority on sustainability (more on that later). The same goes for tour operators.

Otherwise, the best things you can do are avoid single use plastic, waste/discard as little as possible, consume as much locally-produced food and drink as possible (all the rest has to be flown or shipped in!) and above all take your time! This province’s natural beauty isn’t meant to be rushed through, so slow down, unplug and just breathe it all in.

So, I’ve covered the world class diving and snorkeling, and mentioned that there’s great hiking in rain forested mountains. But what else can you do in North Sulawesi?

How about whitewater rafting, or trekking up the side of an active volcano?  The province has some of the best trekking of this kind anywhere, including to the Minahasa Highlands, the Tangkoko Batuangus Nature Reserve, Mount Lokon and Mount Empung. In the highland regions, hot springs abound to soak your sore muscles after a strenuous climb.

And if you’re interested in activities on rather than under the water, kayaking or canoeing and stand-up paddle boarding (SUP) are great options. This is also a perfect way to explore the unique mangrove ecosystem of the area. I’ve explored mangroves by kayak/canoe in both south Florida and Colombia, and I can attest to how peaceful and soothing an excursion like that can be.

Indonesian (and in particular North Sulawesian) dishes may not be household names in the west, that doesn’t mean that the culinary offering is lacking. Quite the contrary, in fact! The local cuisine tends to be rather spicy, but not everything will make your mouth burn. For instance, ‘bubur manado’, also called ‘tinutuan’, a hearty stew of porridge consistency made from chicken or smoked fish, corn and vegetables such as spinach. Just leave away the spicy ‘sambal’ and you’re all set!

Since it is an island, visitors should expect to find lots of fresh fish and seafood on the menu, such as shrimp, coconut crab and grouper. ‘Cakalang fufu’ is also a favorite, it’s smoked skipjack tuna that can be prepared and served in a number of different ways.

‘Gohu’ is pickled papaya, which is sweet, sour and spicy all at the same time and is a local favorite. For dessert, try ‘klappertart’, a chilled coconut custard that is typical to Manado but also has a lot of Dutch influence – its name included!

A few words of warning: there are numerous animal markets, the most notorious of which is known as the Tomohon Extreme Market. Given the name I suppose you can imagine a visit there can be a pretty disturbing experience. Even if you’re not one to campaign for animal welfare, the kinds of treatment the animals sold there are subjected to might make you reconsider. The health risks are not insignificant, either, as all of us now know thanks to covid-19. For both reasons, my advice would be to steer clear of these places.

And finally, if you’re like most westerners and can’t contemplate eating dog meat, be sure to avoid anything with the name ‘rintek wuuk‘. Bat, snake and rat meat can also be found on menus, so if you’re not feeling quite that adventurous be sure to confirm what it is you’re ordering!

Combination Beach and Dive Hotel Tip: The Gangga Island Resort and Spa, located on tiny Lihaga Island northeast of Manado, is a great place to go if some members of your travel group wish to dive, but others just want access to great beaches. This 4-star property offers all the comforts you’d expect in an upscale resort, with the added bonus that as of December 2019 a solar panel system was installed which has massively reduced the property’s use of diesel fuel, and has gotten them well on their way to achieving their goal of becoming a zero-carbon emissions resort. Before then they had to run diesel generators for all electrical needs – a big win for sustainability!

Unique Lodging Tip: The Tangkoko Sanctuary Villa & Spa just outside the Tangkoko Batuangus Nature Reserve, is a rustic and beautiful yet quite affordable inn set on a hillside overlooking the rainforest. Just about everything is made with beautifully crafted wood, and each room has its own terrace with fantastic views. There’s a restaurant, bar and free wifi…but hopefully you won’t use it much, because this looks like the perfect place to unplug and unwind!

Tour Operator Tip: If you’re coming from Germany, Green Tiger Travel is a specialist tour operator focusing on southeast Asia. They offer an individual, customizable three-week tour which visits not only Bunaken National Park, the Tangkoko Nature Reserve, Gangga island resort and Tomohon (known as the ‘city of flowers’), but also several other locations in Indonesia. It’s an ideal way to get a good flavor of this province and others, without having to worry about all the planning and logistics yourself.

Getting there: The gateway for almost everyone entering North Sulawesi will be Manado’s international airport. At the time of writing Manado has direct flights to Jakarta and Singapore, plus numerous other smaller airports in the region.

When to go: Except in the higher elevations, it will be hot to very hot year-round, but unless you fancy a lot of rain, the best months to visit are May through October, with a shoulder season of April and November.

I hope you’ve enjoyed learning about this intriguing destination together with me. Happy travels!