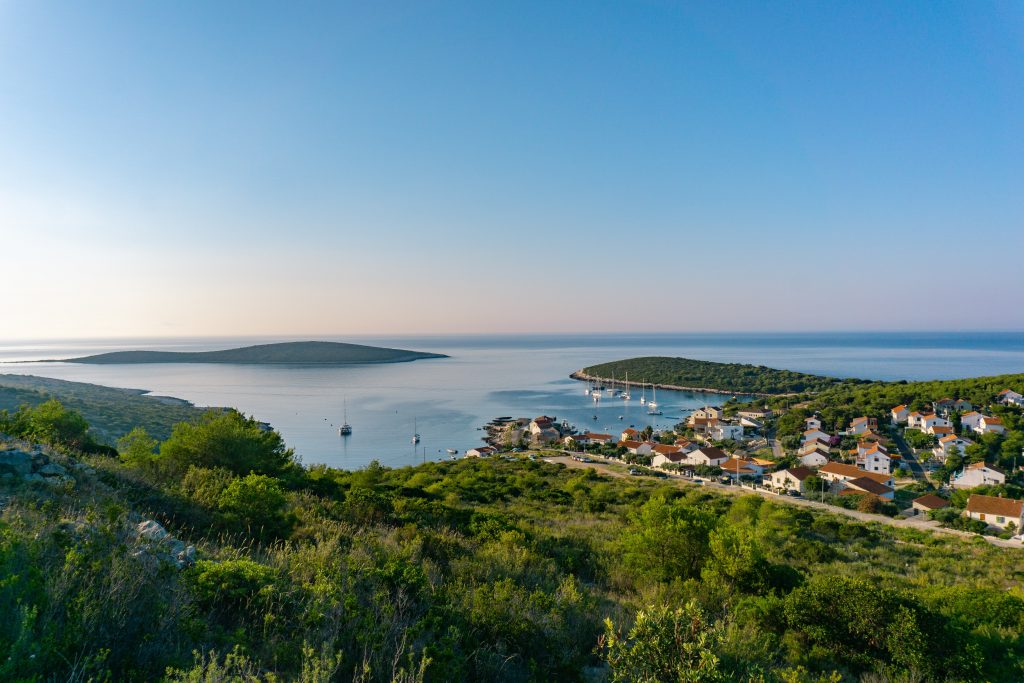 After last month’s frozen destination, I thought it was a good time to move on to warmer climes…because, if you’re in the northern hemisphere, spring is here and summer’s coming. Yay!

This month’s destination is Vis, one of many beautiful islands in the Croatian Adriatic. Vis is unique, however, in that it’s located farthest from the mainland, and due to its particular history (I’ll get to that in a moment) it is much less developed than most Croatian islands. There is zero mass tourism on Vis – it’s a refreshing contrast to some of the more built-up islands nearby, and let’s hope it stays that way!

Vis will appeal to:

Vis is only a little over two hours by ferry from the bustling coastal city of Split, but it’s a world away in terms of atmosphere. With less than 4,000 permanent residents and about 3,000 visitor beds, Vis is refreshingly peaceful while still offering enough tourism infrastructure for a comfortable stay. If you like to avoid the crowds while visiting a beautiful place with great food and lots to see and do, Vis is really a ‘Goldilocks’ destination.

The island is small (about 90 km2) and hilly, with its highest point at 587 meters (1,926 feet). It has some fantastic (mostly pebble) beaches, numerous wineries and only two main settlements: Vis town in the east, where the ferry terminal is located, and Komiža in the west.

Vis also has a long and interesting history, having been inhabited for thousands of years and controlled at various points by various empires (the usual suspects: Greek, Roman, Venetian, Austro-Hungarian, etc.). One of the most interesting historical aspects of Vis, which is responsible for its lack of overdevelopment, is the fact that from 1940 until 1989 the island was home to a military base, and outside visitors were prohibited. The island only reopened to international visitors in 1991, and thankfully since then development has been kept to a minimum.

Finally, for ABBA and dance musical fans, Vis was the film location for the 2018 movie ‘Mamma Mia! Here We Go Again’, which I have to admit I have not seen…but I did watch the trailer, which includes lots of gorgeous island scenery!

Vis is a great place to have a sustainable holiday. So many planet-friendly activities are available (more on those in a moment), making it possible to visit responsibly without even having to make any significant sacrifices in your enjoyment.

For example, the island is small enough that you really don’t need a car to get around. Buses and taxis are available, but a small scooter, or better yet an e-bike (or regular bike, if you’re fit!) will provide all the mobility you need. The local food and wine are fantastic, and the very small scale of tourism on the island means that much of the money you spend there, stays there with the local community.

Conservation is still a critical issue, however, and the standard concerns faced by many small islands are relevant here as well. That means avoiding single-use plastic, minimizing your water consumption and being mindful of the waste you generate. If you take any boat trips it’s also important to ask questions of the tour operator, as the area is home to an enormous diversity of sea life, and inappropriately-run water enterprises can be damaging, for instance to the local dolphin population.

So, what is there to do on Vis and its surrounding islets? Well, besides relaxing on a beach or taking in the gorgeous scenery from various angles, plenty!

For starters: bicycling, cave/grotto visits, kayaking, swimming, boat tours, military bunker and tunnel visits, sailing, wine tasting, snorkeling, diving, hiking/walking, and stand-up paddle boarding. Of course, just taking a stroll through the island’s two quaint towns, stopping to enjoy some gelato on a seaside terrace, is also a must! Basically, even if you stayed an entire week on Vis, it’d be difficult to get bored.

A little more detail on the boat tours: there are many options, but what many visitors choose to do is book an all-day boat tour which takes you around the entire island as well as to a few of the nearby islets, visiting famous spots such as Stiniva Beach, the Blue and Green Caves (beautiful!) and a unique submarine tunnel.

Upscale Lodging Tip: Hotel San Giorgio is easily one of the nicest lodgings on the island. It offers nicely appointed, modern rooms and suites with breakfast included, some with jacuzzi and private sea view balconies, plus a highly rated restaurant on-site, an in-house tour guide and a lovely courtyard for dining and relaxing.

Unique Culinary Experience: Ispod Peka (‘Under the Bell’) is a traditional regional dish. The base is generally lamb, squid or fish (although vegetarian versions have been developed), which is slow-cooked with potato, onion and spices under a metal lid covered in hot embers. Since it takes several hours to cook, ordering ahead is a must. Peka is available at lots of little rural farm restaurants. Belotovo is a top-rated farmhouse restaurant offering peka.

Tour Tip: Vis Sea Adventure offers motor and sail boat tours as well as watersport equipment rentals and tours. Multi-day custom-made packages are also available, and can cover both sea and land activities. They are highly rated and offer both individual and small group tours.

Getting there: There is no airport on Vis (thankfully!), so a boat or helicopter are the only ways of reaching the island. The only car ferry is to/from Split, and in season there are generally two trips per day. Passenger-only ferries are also available from Hvar and Brač islands.

When to go: High season is July and August, and will be the busiest and most expensive months to visit. That said, even in high season Vis is a pretty low-key place! May/June and September/October can also be really great times to visit, with less heat, fewer visitors and often lower prices. The water will still be a bit chilly in May and early June as well as the latter part of October, but if you don’t mind slightly cooler temperatures for swimming it’s absolutely doable.

Thanks for reading, hope you’ve enjoyed learning about this month’s destination!